StageNotes.net, an authorized educational resource for Broadway productions and their national tours, is designed to help K-12 teachers integrate the theatre and performing arts into Common Core Standards-based curriculum utilizing today’s readily available technology tools. Our mission is to help inspire creativity in our nation’s classrooms and promote life-long learning through the arts by providing teachers with innovative lesson plans and direct access to artists and industry professionals.

Educators, families, theatrical producers, arts organizations, and industry professionals. StageNotes Publishing Group is proud to present StageNotes.net, an online resource for educators featuring a wide range of free, affordable and easily accessible theatre arts inspired tools that can augment student learning in, around, and outside the classroom. Our intention is to provide news about books, shows and films; deliver authorized lesson plans based on Broadway’s vast library; offer production tips for the school production; and list information on enrichment programs that can enhance a field trip to a local performance.

StageNotes Publishing Group, a New York-based digital content development and distribution company, works directly with productions, authors, estates, and licensing companies in a concerted effort to invigorate and sustain performing arts education in K-12 schools by facilitating proactive communication between professionals in the industry and the teachers around the nation who are inspiring future artists and audiences.

StageNotes was introduced in 2000 by Camp Broadway LLC who launched StageNotes®: A Field Guide for Teachers, a study guide series that features standards-based activities and discussion questions for dozens of Broadway shows from classic musicals such as 42nd Street and Kiss Me Kate to contemporary works including Wicked, Legally Blonde, In The Heights, Billy Elliot: The Musical, and The Addams Family. In 2002, Camp Broadway received the Educational Theatre Association’s Standing Ovation Award for Leadership in Education.

Camp Broadway continues to present experiential interactive workshops themed around most Broadway shows—attended by nearly 400,000 students from around the world. 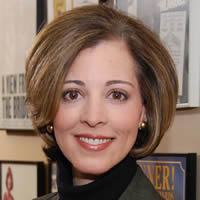 For 30 years, Susan E. Lee has been an innovator and an industry leader working with many theatrical producing companies and non-profit arts organizations. She introduced Camp Broadway LLC in 1995 and has since managed the brand, business and program development. In addition to her role as founder and managing member of the company, she is the Chief Marketing Officer for The Nederlander Producing Company of America, where she oversees new business partnerships and marketing. Since joining the company she successfully developed and launched Audience Rewards, now the official loyalty program for Broadway; The National High School Musical Theatre Awards aka The Jimmy’s Awards, named in honor of James M. Nederlander; and InTheatre Network, which is now operating across all Broadway theatres.

Prior to joining The Nederlander Organization, Susan oversaw the development of new business strategies and marketing services for Serino Coyne, Inc., the largest full-service agency in the live entertainment industry. Under her leadership, the agency expanded services to include Internet marketing, sponsorship sales, media promotions and cultural tourism. Susan has also represented a portfolio of theatrical properties for sponsorship and product placement. She developed and implemented the marketing partnership between Visa and the Tony® Award-winning musical Movin’ Out on Broadway. Following a successful partnership in New York, Visa became the title sponsor of the national tour of Movin’ Out, which was supported by the largest integrated marketing campaign in theatrical history. While at Serino Coyne, Susan also launched Tuesday’s at 7 and Season of Savings, Broadways largest industry-wide cooperative consumer outreach initiative, which has generated over 50 million dollars in ticket sales since 2000.

Working in partnership with Sound Associates, Susan also successfully introduced ShowTrans® on Broadway in 1996. ShowTrans is an assistive technology that provides multi-lingual audio commentary for non-English speaking audiences. ShowTrans is operating at The Phantom of the Opera, Wicked, Mamma Mia and others. Susan helped introduce sponsorship marketing to Broadway during her tenure as Director of Marketing at The League of American Theatres and Producers, where she launched Broadway on Broadway, The Broadway Line and, most notably, Celebrate Broadway: The 100th Anniversary of Broadway in Times Square. Prior to joining The League, Susan was the national press representative for Yul Brynner’s Farewell Tour of The King and I, Arsenic and Old Lace starring Jean Stapleton, and Macbeth starring Glenda Jackson and Christopher Plummer. She is a member of The Association of Press Agents and Managers.